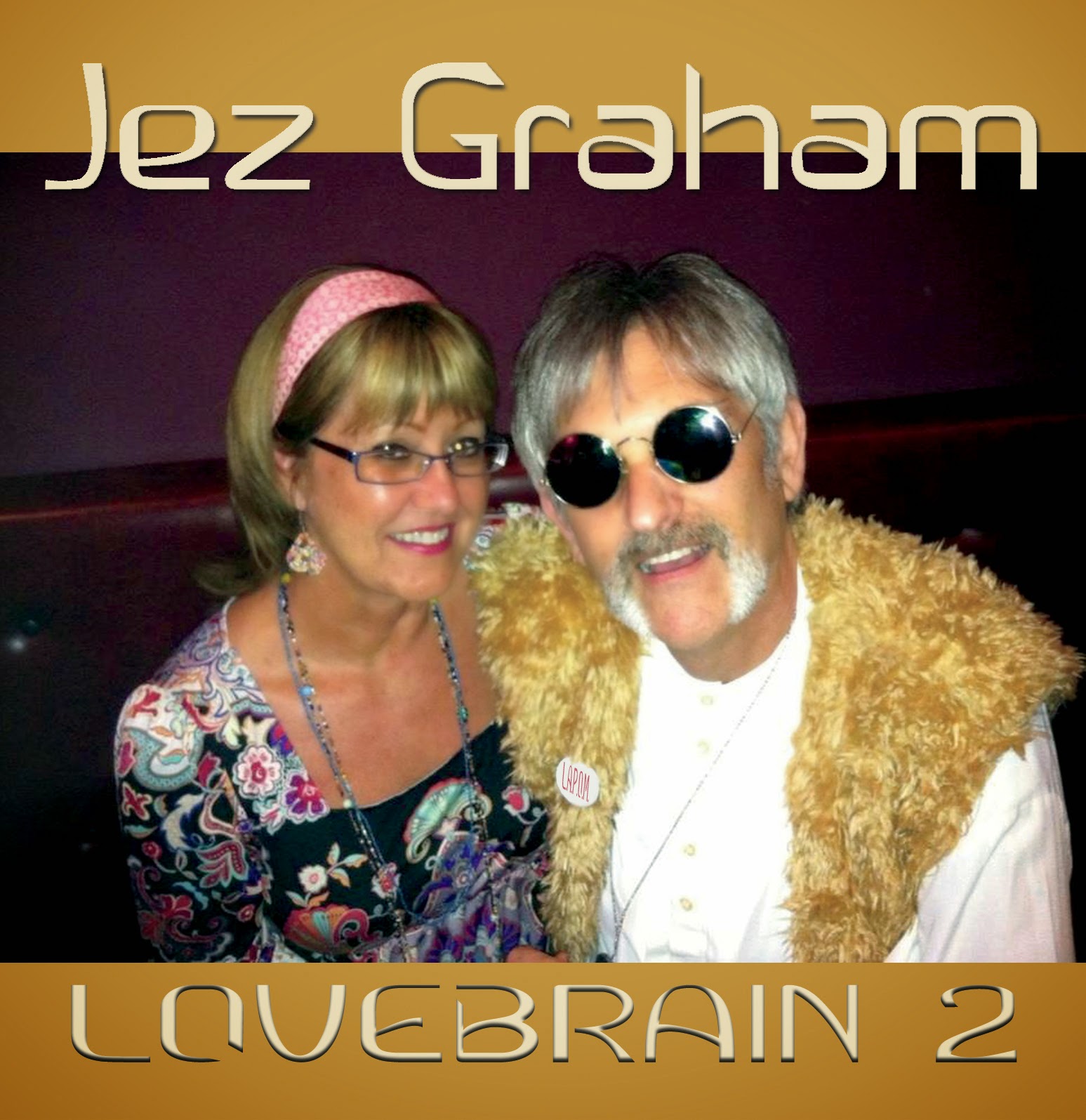 As I reflect on the journey to LOVEBRAIN  2, I breathe a sigh of completion and have accomplished my objective which was to make a record of songs that reflect the journey I have been on in the years since the 1st volume of LOVEBRAIN was released 20 years ago. This volume includes a number of songs written in the last 6 years as well as some songs from the catalog that I have long wanted to officially document.

For this volume which I began work on in 2008, I sing all of the vocals and play most of the instruments on a number of the tracks, but there are also some very special musical friends and family adding to the tapestry.  Musically woven in are elements of the improvisational nature of my being which you will be familiar with if you have heard me play piano/keyboards, but the LOVEBRAIN version of me focus's on more on my Songwriting and Singing. I've always loved playing guitar, bass and drums and on these songs I get to express that side along with plenty of keyboards too.   This is what the music in my head sounds like and I'd like to thank all of my collaborators for taking this journey with me and helping me realize this project.

Thanks to all of the artists who contributed and also to Col. Hampton for loaning me his SG for my guitar solo on Mind gangsters

This album is dedicated to my Wife, Daughter and Son
Special thanks to Phil
For more info-www.jezgraham.com

Side 1
16-30-
Jez-Vocals, Piano, Synth,
The original version was called Mindy #16 and appeared on the first Lovebrain. These new lyrics reflect our 30'th anniversary.

Mindy Lu-
Jez-Vocals, Guitars, Piano, Drums, Bass Guitar
This is from the first love operetta that I wrote for Mindy in 1983 "Two Hearts in The Land of Um" There is another song from this era called "Mindy Love" that is her favorite of all of them. It will be on LOVEBRAIN  3

Thank You Dad-
Jez-Vocals, Acoustic Guitar, Piano
I wrote this in 2006 as a Fathers day song for my Dad but  he never got to hear it in his lifetime although after his sudden passing in 2013 I sang a revised version at his memorial. I used to sing this on Fathers Day at the Unity Church. It is bittersweet but obviously a very important song to me.

Tallest Trees-
Jez- Vocals, Piano
Del Baroni-Bass Guitar
Janna Graham-Mandolin
Terry Vinyard-Drums
We have all these trees in the backyard here at Pine Groove and I get a lot of peace and contentment sitting out back with Flengen the dog and looking up at The Tallest Tree's. It's also the name of a Miles Davis compilation album that I used to listen to when I was coming up.

When I Fail-
Featuring The Return of The Now
Jez-Vocals, Keyboards,  Bass Guitar
Bob Robles- Guitar
Victor Bisetti-Drums and Percussion

One of my goals for years has been to reunite a band I was part of in Los Angeles in the early 80's, We were called "The Now". Through the wonders of modern technology, I was able to have Bobby Robles play his guitar parts and Victor Bisetti his drums and percussion parts and we now have a virtual reunion of this band of friends who are so special to me.

I'm so grateful to The Now for our time together and for this virtual reunion. Victor outdid himself on Drums and Percussion and Bobby's fluid guitar lines on this and on "Always Be Kind" bring a smile to my face.

Surrender-
Jez Graham-Vocals, Rhodes, Moog Bass
David Marks-guitar
David Ellington-Organ
Victor Bisetti-Drums and Percussion
I co-wrote  "Surrender" with one of my favorite collaborators Stephen John Kalinich.
When Stevie sent me these lyrics in 2009 I knew right away that I wanted to put music to it and present it to Francine Reed and her version has now been recorded and released in 2 different versions. One with The Trio(available on Francine Reed and The Jez Graham Trio Live at Eddies Attic) and one in a studio version(Surrender-Francine Reed) released in 2011 as a downloadable single. The version presented here uses the same track as Francine's studio version in a brand new mix.It features David Marks on blistering, soulful guitar and David Ellington bringing it home with his B-3. This marks the 4th released version of the song and I had a blast singing and harmonizing. Col. Bruce Hampton also recorded his own unique version on his album - Pharaoh's Kitchen.

David Beard and I have collaborated on several projects in recent years and I asked him to write a set of lyrics based on reoccurring letters that appear on random license plates that I often find myself following on the way to gigs around Atlanta. Thanks to David for his psychedelic imagery that fits the musical landscape that Bill and I enjoyed creating. I particularly enjoyed playing the guitar solo. Thanks to Bruce for loaning me his guitar.

The basic tracks were recorded at Bill's studio with him on drums and me on piano. Later I added Moog bass and did the guitar solo and some more synth overdubs. Terry outdid himself pulling all of these elements together and the ending segment has elements that reflect my ongoing musical moments with Col. Bruce Hampton and the Zambie way of life culminating with my synth deconstruction and some ultra cool backwards guitar by  David Marks.

Mindy-
Jez- Vocals, Keyboards, Guitar, Drums, Bass Guitar,
Written in 1986, Finally recorded in a new version that reflects our move from Los Angeles to Atlanta in 1988 and the life that we have made here.

"Mindy you're my destiny, One day along a yellow brick road is paradise, That's how our story goes."

Jez Graham-Vocals, Rhodes, Moog Bass, Synth
David Marks-Guitar
Terry Vinyard-Drums and effects
Phil-Wind
David Marks is one of my favorite guys to make music with, He's such a soulful guitar player and person. On "Winter Walk" he musically expresses  with his guitar the vibe I was looking for and captures the essence of what I was searching on that walk. Terry and I had a blast jamming on this groove that takes me back  to the late night deep cuts I used to listen to on the radio stations where my Father worked. Extra special thanks to David and Carrie Marks, We love you guys!

Sunset-
Jez Graham-Piano. Left hand Bass, Synth
Mike Haid-Drums and Percussion
This one is a collaboration with my good friend Mike Haid who invited me up to his place in the Georgia mountains back in 2007 for some duo improvisations. We recorded several pieces that rank with my all time favorite improv's. I  played the piano and left hand bass parts at the same time as I would normally do on a gig. I later added some synth overdubs. Thanks you Mike for your spirit, drumming and friendship.


Dan Rather Sings The Blues-
Jez-Vocals, Keyboards, Guitar, Drums, Bass Guitar
I wrote this one in 1981 and used to perform it with my group Section 8. When I was starting to go through my catalog of songs written over the last few decades with my son Bill as a sounding board this is one of the ones he picked. My Dad always liked this one too. At one point I had considered changing the title to "Ted Koppel Sings The Blues" and later "Wolf Blitzer Sings The Blues" but eventually I decided to keep the original title.

Lovebrain-
Jez-Vocals, Keyboards, Guitar, Drums, Bass Guitar
An ode to my beautiful and loving wife and kids. This one began life as a song called "The Big Ballad" I started it in 1985 when I was on a gig in Big Bear and I missed Mindy. Through the years I would revisit it now and then and always particularly dug the augmented chord progression and the vibe. Eventually I added some new lyrics and realized that the song is the story of coming to terms with who,where, and why. It seemed a good way to close the album and this chapter.

A quick word about the photo's. Mindy and I were dressed as 50's teenagers in love for the first volume of Lovebrain so we thought it would be fun to move up a decade or 2 for this album cover. The back picture is young Jimmy "Jez" Graham in Stockbridge Ma. playing my brothers Epiphone.
Thanks for listening and thanks to all of my collaborators, and to all of my family.

Love and Peace of Mind,